Alston Hall, picture taken from the top lawn in the late 1950's 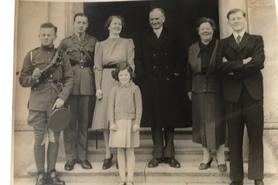 Alston Hall was completed in 1906, reputedly it was built by the wife of the vicar of Holbeton and she had an obsession of having a bigger house than the vicar of Modbury, as rumour goes the vicar had to have his wife sectioned under the mental health act before the house was completed as it had used virtually all of their family’s wealth!!

After the First World War when Alston Hall was taken over as a base for Canadian and American troops, it became the family home of the Sayers family, they became large land owners locally in the area and farmed extensively, today the family still are one of the major land owners and farming families in the area and they market their superb meat under the wonderful brand name the “Well Hung Meat Company”, do try it, you will be delighted (www.wellhungmeat.co.uk).

Alston Hall was one of the first houses in the area to be connected to the mains electricity network and also, later, to the telephone network shortly after it was established, Alston Hall actually had a switchboard room all of its own (where the ensuite to bedroom 4 is now).

The lady of the “Sayers” house was honoured by being appointed a Dame of The British Empire for her political services including the promotion and empowerment of women in society of what ever class.  She was also a very keen gardener and worked in the field of botany and in particular, peonies.

In the 1960’s the whole house was sold and it became a country club, over the years that business was expanded and developed with the addition of hotel bedrooms and then the indoor swimming pool and then the tennis courts creating a popular luxury boutique hotel.

When the internationally hugely successful Ang Lee film “Sense and Sensibility” was filmed in 1995, a lot of the filming was undertaken at nearby Mothecombe Bay (a wonderful beach and the closest one to Alston Hall), during that time the hotel was taken over by the film company and both Hugh Grant and Emma Thompson stayed here, over the years there have been very many celebrity visits and Alston Hall had a reputation for hosting some of the finest weddings and major family events such as wedding anniversaries and milestone birthdays in the region.

In 1996 the house was sold to the Steven family and it was returned to its original use as a family home, John and Lynne brought up their four children from 1996 to 2014 and then as the children decided to move away from home to pursue their careers, Alston Hall undertook its latest lease of life and is now available for families and groups to enjoy – we very much hope you enjoy every minute of this beautiful house. 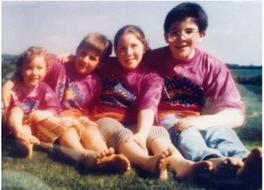 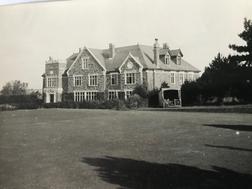